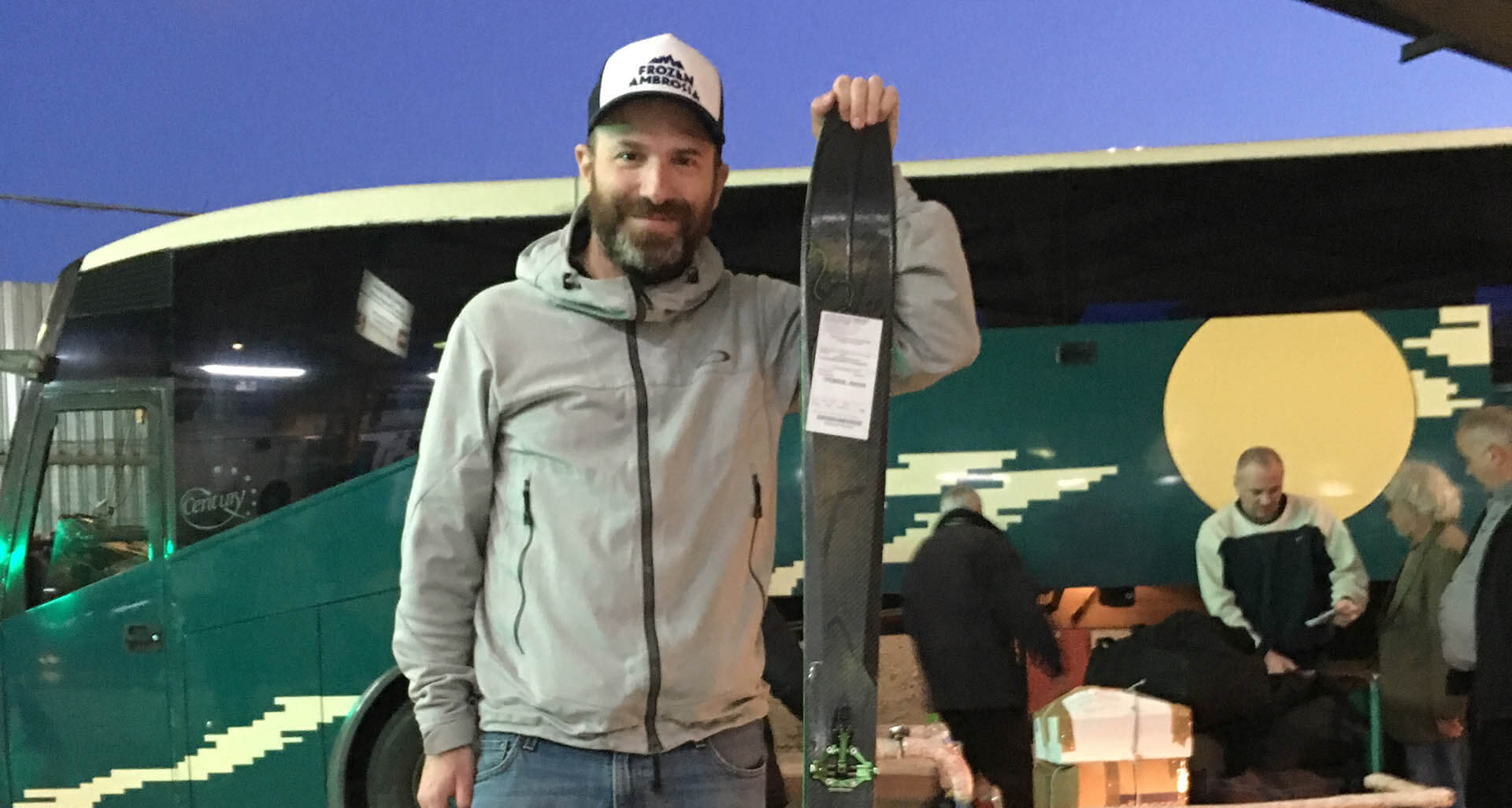 It started out as an easy day. When the phone rang at eight o’clock in the morning, with our friend Jimmy (Dimitris) Papanik on the other end, we were still in the hotel room packing our gear. Jimmy lives in the city of Grevena, about an hour and a half away. He was already on the mountain. Embarrassed, we finished packing up, ate breakfast, and headed up the mountain.

Our original plan was to go to Olympos, to sleep a night at the refuge on the south side and to ski some easy warmup runs. However, after a rapid fire sequence of accidents on Olympos, including the death of a beloved member of the Greek mountaineering community, we decided to change the plan. Going back to Athens wasn’t an option. Six months of boiling summer heat had driven us to madness. Smolikas, the second highest summit in Greece, was an extra 2 hours of driving, but the best chance to get our fix.

Sunset in mid-December in North Greece occurs at 5 p.m., so we had set a time limit of three o’clock. No matter where we were, at 3 p.m. we would start the descent.  Turning around at 3 p.m. would give us a two-hour buffer in case we encountered a difficulty. Plus, the weather had been unsettled all day, with high clouds and scattered patches of fog in the drainages. If it got worse, getting back to the road would be a challenge. Turning around at 3pm was the smart approach.

There were still a few minutes to spare. “A couple more steps, I just want to see if I can make it up this little steep section.”, that was my thought. We had arrived in a small gully close to the summit. There wasn’t enough time left to make it to the top, but we still had some time and we were determined to go as far as possible. Unfortunately, the day before, the wind had started blowing from the south and it had rained lightly all the way to the summit. The top layer of snow was firm and icy. Holding the edges of the skis on the steep section in front of us was impossible. For some stupid reason, I decided to give it a try anyway.

I kicked the edge of the ski hard into the snow, trying to get the edge to hold. It barely left a mark in the ice. I tried again. Same thing. Just to be sure, I gave it one final try. Right when the ski hit the ice, the binding popped open. Before I could blink, the ski had taken off down the gully. For a second, I thought it would stop in a small flat section, but it kept going. Down and out of sight it went, with the climbing skin still attached.

No big deal, I figured at first. The weather was still cooperating, we could find the lost ski. I took off my other ski and began hiking downhill. Socratis and Dimitris, my two partners in this adventure, began to remove their gear to come help with the search. Before they could get their skins removed, before I could walk just 30 meters, the entire upper half of the mountain became swallowed in fog.

Several minutes passed. The fog was only getting worse. An otherwise easy going day had rapidly turned into a serious adventure. A decision had to be made, and fast. Further down the mountain, perhaps only 50m away, lay an object of great value to me; a limited edition carbon fiber Dynafit ski, one of the most fun skis I have ever owned, which would be expensive to replace. More snow was expected in the coming days. After that the ski would be buried until summertime. It was a dilemma. Should we hike down the gully to search for it, or should we retreat immediately?

Accidents that happen in the mountains are not usually caused by one single mistake. They’re usually a sequence of mistakes that compound together to create a single disaster. This situation felt like it was headed in that direction. First, the late start. Second, trying to go up an icy slope without checking the gear first. One more wrong move and things could spiral out of control. The decision wasn’t hard. We put our gear on our backpacks and began to retrace our steps back to the road.

It was disheartening leaving such an important piece of gear on the mountain, but there were no second thoughts. Of course personally I felt bad because my mistake had cost Dimitris and Socratis their first descent of the season. However, when you’re in a team, you can only move as fast as your slowest person. Fortunately they weren’t bitter at all. Several hours later, at the end of the twilight, we reached the car.

In my mind the ski was gone. Dimitris and I had to return to Athens that night, and with the new snow coming in the days ahead, the ski would almost certainly become buried. The best case scenario was to return in May to search for it. With some luck it would still be in usable shape. On the drive down the mountain my phone rang, it was Jimmy from Grevena. After hearing about the lost ski he offered to go back up the mountain the next day to look for it, weather permitting.

Driving back to Athens we wondered whether the whole affair was some kind of test. Were the Gods playing a trick on us? It certainly seemed like it. And if they were, it certainly seemed like we had passed. I had a good feeling too that Jimmy would find the ski. On our hike out, the fog had cleared a few times and we were able to look back at the gully where the ski became lost. There was one section with a sharp turn and a bunch of rocks. Almost certainly it had stopped there.

The next morning the weather was not good on Smolikas. Fresh snow had fallen during the night and the wind had picked up. The outlook for finding the ski was not promising. My spirit was broken and I moved on to other things. I didn’t hear anything from Jimmy all day and I worried. Had he gone up the mountain or not? Hopefully I hadn’t put any pressure on him to do so. Just as I was ready to give up all hope, the phone buzzed. It was a text from Jimmy. He had found the ski, it was in perfect condition, and he would send it to me by bus the following morning.

What would would have happened if we had gone after the ski? Perhaps nothing. It turns out it was less than 100m from where we stopped. Perhaps we would have found it, and we would have enjoyed a nice descent back to the car. But as I’ve learned from experience traveling in the Greek mountains, you must always be prepared to walk away. The Gods demand respect. Don’t think twice. Give it to them. If you do they will look fondly upon you. If you’re lucky, they might even return your lost ski.